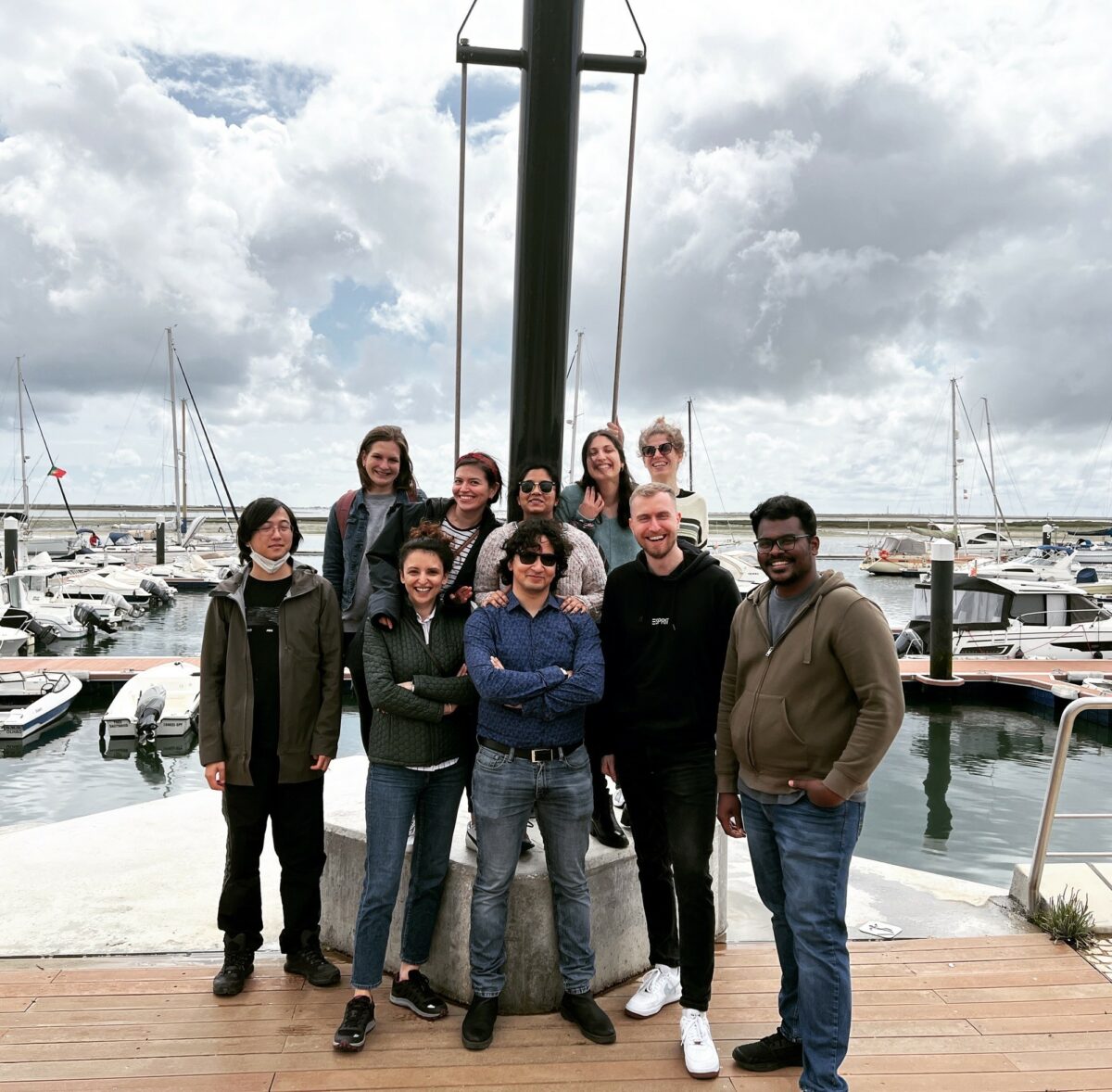 After months of online meetings, our consortium members met for the first time at the SkinTERM Annual Meeting in Olhaõ, Portugal. We have enjoyed the personal interactions and excellent discussions that strengthened our collaboration. The PhD students presented their research results, got trained in communication, career development and microscopy, and -last but not least- had a workshop on the Acomys (spiny mouse) model, a species able to regenerate many organs including the skin. In this blog our PhD students describe their experiences during this interactive week at the Portuguese coast.

We are George Vogelaar and Jiazheng Lai, SkinTERM ESRs 7 and 8 respectively, working at the Helmholtz Centre in Munich. Our work took us to the Algarve, in the south of Portugal, to take part in the yearly SkinTERM conference, hosted by the University of Algarve.

Joined by Prerna Karthaka, ESR 6, we flew together with our supervisor Dr. Dongsheng Jiang from Germany to Portugal. The flights were quick, and we soon found ourselves at the doorstep of the 5-star Hotel Real Marina in Olhaõ. After shortly admiring the interior of the hotel, we were quickly requested by the organizers to gather in the lobby. The sun had set and we were led into the cooling night, towards the city proper. We arrived at an old building, once the headquarters of a gentleman’s club, for a welcome dinner. We were delighted to finally see each other in real life, after having worked together digitally the past few months. Some of us were taller than we had previously thought.

On this first evening the atmosphere was warm and science made way for discussions on other topics, from history, to politics, to local cuisine, including strong-liquor akin to fire-water and of course the iconic Portuguese green wine. Sadly, the Algarve’s famous sardines were out of season.

On Friday morning 9:00, the coordinator, Dr.ir. Willeke Daamen provided an overview of the overall progress and plans of the SkinTERM project. Subsequently, Dr. Gustavo Tiscornia, on behalf of the hospitable organizing UALG team, warmed up the atmosphere during the welcome session.

After the early session, ESRs had a team building activity by the use of a “treasure hunt”. We had to travel around the town and ask specific questions to the locals, which would lead to other clues. We had to do this in pairs and would therefore test our teamwork skills (and ability to communicate with Portuguese citizens). By random draw George got lucky and was paired with Madalena, both speaking Portuguese and thus believing that victory was in the bag from the start. However, this team misinterpreted the first two clues TWICE and one time walked way too far from the city. Despite these setbacks, most of the answers were obtained from kind persons at fish market. Having collected all the clues, they casually walked back to the hotel when Jiazheng and Nancy were already ahead. Testosterone and competitive nature forced George to start running. Twenty seconds in, Nancy turns around, sees the other team and starts running too. After this fun chase, Jiazheng hands in their report first. That would have been a simple win for Nancy and Jiazheng, but alas, they didn’t have a perfect score on the answer sheet, while Madalena and George did, making them victorious. Proving that the running was completely unnecessary, we however regret nothing and remember the moment fondly. We were all awarded with quality salt and honey from Algarve.

Next up was career training, presented by Dr. Rob Dekker and Leen Limbourg MD (Atoms & Art). We all got high on our ambitions of becoming entrepreneurs and heads of a Research and Development department. Separated in groups, we presented the important aspects of different jobs we might take in the future: from employee to boss, from research to market. There are lots of potential branches in the future. We also answer the questions in a mimic interview. After finishing the daily session at 18:30, we had a dinner that evening with about half the ESRs, where we enjoyed the local cuisine, where it was explained how to eat crustaceans, cracking their hard shell and pulling out the meat within, while Jiazheng tried the local delicacy “stars of the sea”, which were squid-eggs. It was met with mixed reception.

On Saturday Dr. Manuel Concieção and Dr. Pedro Sousa (UALG) gave us a very interactive communication training: we learned how to communicate with different target audiences; we presented our own projects with a layman version, which had different requirements and really got most of us awake. It was followed by the first ESR Seminars and Poster session, including ours. Even though Muhammad and Mahrukh were unable to come to Faro, they still managed to present online nicely. A marathon for sure, but having heard our fellow researcher’s projects before, we were able to engage with them. On Sunday afternoon we all did a boat tour through the shallows of the coast of Olhaõ, to a long island. We stopped at the village called Farol (called Farol because of the lighthouse) with an oyster restaurant, where George ate 8 of them! Delicious!

On Monday we got a very broad lecture on microscopy provided by experts in the field Dr. Gaby Martins and Mariana Ferreira MSc (Gulbenkian institute). The session starts from the rationale of optic microscopy, then to different laser microscopies (e.g. confocal/ light sheet microscope), and electron microscopy. The samples being observed starts from normal tissues, goes to embryos and organelles, as technology develops; the session somehow managed to still go quite deep on the recent technologies and how they work. Lectures were followed by a hands-on workshop of Fiji, an important open-source image editor. A good practice for image processing skills.

The last two days were all about the Acomys, spiny mouse, model. On Tuesday, we had lectures about the physiological traits of Acomys and the regeneration ability of Acomys to rehabilitate organs including skin and even spine, which impressed us a lot. At the University of Algarve, handling of Acomys was demonstrated and stainings on Acomys tissue sections with antibodies that were of interest to our research project were performed. We also performed a strength test between skin of Acomys and mice, and it was interesting to observe that the skin of Acomys is much more fragile.

Finally, the curtain had to close on our annual retreat and we returned to cold Munich. But the weather didn’t cool down our memories in the annual meeting and our willingness to see each other next time. Wiser and motivated to pursue greater heights.